We Are Deep In the Heart of Texas

Nomadic seasons of farming adventures with nature thrown in to include; a pinch of family, snippets of friends, counting our blessings, paying IT forward, home school, and the spicy things I decide to rant about.

So I Decided to Do a Thing

I have always heard that a raising tide lifts all boats. What a load of horseshit that is.  It is not true; everyone doesn't have a boat, can swim or lives near water.  FFS What is wrong with people?

I however, cannot expect change to happen without getting uncomfortable and doing the work to make change happen.  So, I ran for County Party Chairman.  Now, I am it; new on the job, learning how to be a politician and work well with others.  Should be easy right?  Nothing is further from the truth. We have become so divided as a country; I don't know how we are going to unite again and that unison always seems to come under grave threat to our country during national emergencies.

We all are guilty of maligning or labeling the other side as deficient in some area like intellect or moral character.  What I have learned is in my county in the reddest of red soup bowls; I am not alone searching for other blue dots.  This will be my first election as a judge and worker.  By chance, I have with phone calls,Twitter, Facebook made progress in learning my new job.  I am also going to build a "continuity book" so, the person that proudly signs up for county party chair will have a blue print and know when and what to do.

With all of this; love another because most are just trying to live their best life. Now please get out and vote. I really don't want to read other Inspector General reports about how terribly our government are treating detainees, immigrants or prisoners. Our Social Security, Medicare, Medicaid and the future of our great grandchildren at risk.


The POTUS is a white supremacist plain and simple. The Grand Ole Party (my old alma mater) died and resurrected itself into the nationalist clan of T.  Our White House is now the grand wizard's castle.  What is shocking but, not really shocking is a full half or more white people own this racism and I see you.  So, what are you going to do?

I have went to rallies, volunteered for a campaign, wrote, called, texted, block walked, ran for office and won a seat.

Anyone having trouble relaxing tonight? Man, I am. I have from the beginning of this election campaign when Trump announced. I have always thought Trump was a 'mark' to hold the door open for the #GOP into the White House.
A few years ago Hubby & I joked during the 2011 #WHCD. -- "What if Trump does run to make sure #Clinton has a chance? Do y'all remember all the negative publicity Trump brought to the GOP bolstering the DNC as the 'sane party?' Because of the nonsense with the birther movement.
Hubby & I thought Trump would have a better chance than Romney as a national candidate. We talked about the idea of the DNC & RNC making a deal to get & keep both houses because there is more money to make there for corporations through repub-based legislation. Another plus would be the DNC taking a 3rd Dem Exec seat and later be known as a "save-face" after the economic crash.
We were only joking and making 'what ifs' as we watch Trump grin and bear the ribbing from those at the podium. Anyone could see Trump's wheels turning in his head.
Crazy thing is, we are not fans of Clinton. We both served our country during the Clinton era. No, thank-you because MrC compromised so much he was in the RNC pocket. Mrs is a ( Rep) in Dem disguise. She did not support many humanist goals I believe in as a voter. I told Nigel as my witness, I could not support her then. Sadly, I am still in that position along with hubby.
Things I don't support about Clinton
the woman card, voter fraud, MrC showing up at polling places, email, Iraq war, not supporting the min wage hikes, & ripping pages from Sanders campaign (I'll add more later)
Now with #Cruz dropping out after announcing his running mate in a weak attempt to garner more votes. We are stunned was he paid off or just 'suspend' so he could come in at a later time. #Kasich is suspiciously quiet after garnering what 8% in Indiana. Perhaps Priebus and deep pockets are scrambling now to work in a way to ensure a contested convention. Lets think about this folks, Cruz quit but why? This is what is running through my mind.
Any ideas because the Crap is definitely not funny anymore. I will leave you with Meat Ball's Ghost's tweet in 2012 & blame him/ her for putting 'Trump as Pres' into the Twitterverse. 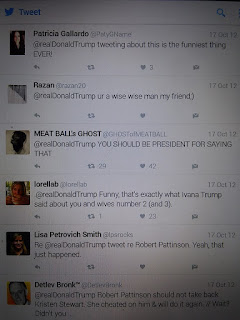 Folks, Give it a Rest, Don't Let Your Privilege Show

I think my head is going to explode.


People are people. Gay, Straight, or Trans-gendered since the dawn of time. If I see one more person say they are having the 'gay agenda' forced on them--


I will spew such a font of information.

Don't make me do that.

FFS, Adam and Eve were not the first couple..... look up Lilith. The Bible is not a complete text and is so outdated it would not even run on a WINDOWS 95 machine.

Christians appropriated history from many cultures check out what they did to the pagans.

ALL 200 world Religions swallow up other religions they have conquered so, the victor writes the history books or the religious cannon.

But people are people, we FOOK UP, We either follow rules adamantly, follow when necessary, choose what we follow, or say FOOK IT later to join the herd or just go off the beaten path.

Really tired of the pushing other folks away just because what they choose to do with their life, pop a squat, choose to bump uglies with in the bedroom, put in or on their bodies, teach there children, cross a border or whatever fooking makes us different.

By Chance Meetings On Social Media

Our world is changing and I believe it is a great thing in many.

I have met through social media many talented people as well as a few arses. It may be true even that for some social media keeps us apart while, for myself it does not. I actually learn more and meet folks online since we live in a very rural area and going into town daily is not feasible.


Today, by chance through Twitter I found a Kick starter fund raising request for a new short film called "Scythe" by Jim Rothman. So, I am a noisy person and through asking questions found one of his brilliant films called "Minutes" on YouTube. It is only 17 minutes long and will gut you. People are flawed, we all have our prejudices. We often pre-judge others by the behaviors we 'usually' are guilty of as far as judgement mistakes.

This is what stuck out for me.

When sitting in the Clinic, Jacob (Rothman) sees a man (Michael McDonald) he passed judgement on before. This man, John turns his head and Jacob sees a sore on the back of John's neck.  Jacob's physical reaction is palpable since, he may be viewing a piece of his own future.  I am not going to give much away because the film is only 17 minutes.  It is so worth your time to check it out.  I will will use the film later as a discussion point for our sons about compassion.

This quote stands out
"Does it hurt?" asks Jacob.
"Only the Solitude." answers John.
(I actually teared up again.)

I am going back to find his other work / films.

So I leave you with "Minutes" by John Rothman

Rothman's next project is 'Scythe' which, you can search for on Kick Starter's website by clicking the name in this sentence. Then type Scythe into the search menu.

The last time I cried more than once over a celebrity was when I learned that Nina Simone had died, I was wiped out emotionally for awhile. Her music seem to just mirror all the things in my heart and soul were experiencing.  David Bowie was a kick in the gut as well and I mourned. Prince's death is the one that actually made me cry -- the ugly cry.

I am usually pretty good at compartmentalizing to keep my bipolar mood swings in check.  If I opened my mouth I would have been a puddle on the floor on Thursday. I just did not want to share how much his art and music meant to me.  I usually do not geek out and follow actors, writers, or artists.  Don't get me wrong I love music, books, movies and all forms of art.  There was just something unique in his vision.

I was in actual shock though when hubby told me on 4/21/16 that he was dead and glued myself to the news.  Man, the wind was sucked right out of me.  He was controversial because of his lyrics and music to many folks. To me however, he was a liberator, an artist's artist, poet, and musical genius.  His talent playing the guitar and piano incomparable to no other.

Once, the drug rumors started to hit the air waves I tuned out.  I just could not take anymore speculation.  Now on this evening,  I will keep my thoughts and poems private. I just want to send some good will into the universe as I wave my purple pen in honor of an artist who will continue to live in my heart.  RIP Prince Rogers Nelson
Posted by Nekkid Chicken at 11:23 PM 1 comment:

Not so Informed, We are Just Entertained

I am in mourning for America.

With the advent of the 24-hour news cycle in the 90s, the assumption should support a well-informed American public.  This however is not the case.  Look at what is on your cable networks, with the shutdown of Al Jazeera – America, the public look for information about the world are down to:
1.      CNN (supports Clinton or Trump’s shenanigans.)
2.      Fox News (supports the conservative right.)
3.      MSNBC (supports the progressive left.)


4.      HLN (covers trials, forensic files, and other pop culture snippets)
Now for the other offerings are 4 channels with business news, 2 weather channel, 2 channels to cover the House and Senate.  No wonder Americans are so uninformed. Our news broadcasts have become a pop culture and entertainment industry.  There is no place on our cable (DIRECTV network) to check in for information based upon empirical fact-based information.  I miss the day of NPR, Current, and now sadly Al Jazeera-America.

I will not bow down through and become a mindless drone that is spoon-fed information by entertainers as fact.  I will go to other sources to stay informed about my community, national issues and our world.  For the record, I am teaching our sons how to find information using the internet.  I just hope those who take the time to read; do the same.